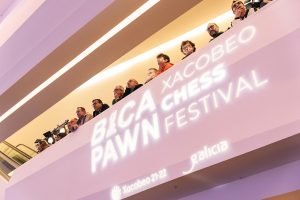 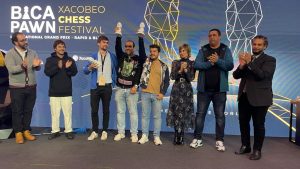 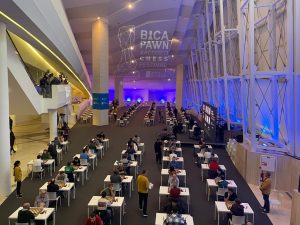 BICAPAWN International Chess Club – a FIDE endorsed Chess club under the auspices of Spanish Chess Federation (FEDA)- is pleased to invite you to participate in the BICAPAWN Xacobeo Chess Festival, an international Grand Prix for rapid and blitz.

This tournament is made up of 5 different open tournaments including 4 blitz tournaments and one rapid for 4 days from October 19th to 22nd, 2022

These International Tournaments will be held at Gaias Museum in “Cidade da cultura de Galicia” Santiago de Compostela, Spain from 19th to 22th of october 2022

The BICAPAWN Xacobeo Grand Prix winners will be determined by adding the points obtained according to the classification of each player in the five tournaments.

These points will be distributed according to the tables shown below. 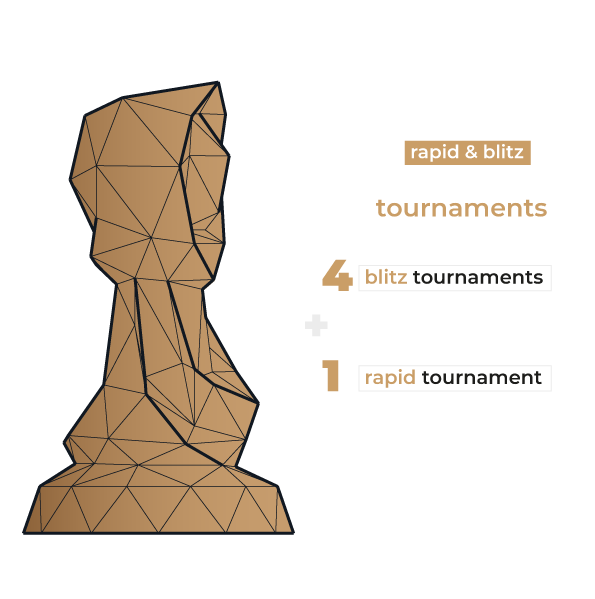 The BICAPAWN Xacobeo Chess Festival will be held at the Gaiás Center Museum, flag-ship of the Cidade da Cultura. The Cidade da Cultura is a unique and iconic modern building that marks the entrance to Santiago de Compostela at the last stage of the Saint James’ Way.

Called to be an architectural benchmark for the 21st century, the Gaiás Center Museum is one of the most unique buildings and one with the most possibilities of use in the Cidade da Cultura, which aspires to become the benchmark exhibition center in Galicia.

The spectacular nature of its facade, the almost 43 meters high and its more than 16,000 square meters of surface allow the Gaiás Center Museum to display a range of training and outreach activities that make it an active center in continuous renewal.


The format will consist of 9 rounds according to the Swiss System.

Time Control for Blitz tournaments are 3 minutes for the whole game with an addition of 2 seconds per move starting from move one.

Time Control for Rapid tournament is 15 minutes for the whole game with an addition of 10 seconds per move starting from move one.

The games shall be played with DGT e-Boards and clocks, and pairings will be made by Swiss Manager Program.

Any player who arrives at the chessboard after the start of the session shall lose the game. 1


Tournaments ranking will be calculated in the following order:

Grand Prix final ranking is determined by the number of points scored in the general classification, following the criteria in section 8.

If at the end of the tournaments two or more players are tied for the first place or for any prize, the tie shall be broken in priority accordance to the classification in the Rapids Tournament.


The chief arbiter and the Organizing Committee will nominate the arbitration team.

The Appeal Committee is selected according to the provisions of FIDE regulations.

Appeal must be presented written to the Appeal Committee 20 minutes after the end of the round.

Appeals will not be accepted if the player runs out of time. Zero seconds tolerance according to the clock in the playing area.


Bicapawn has prepared a total net prize fund of 70,000€ (prizes are subject to the Spanish regulations on awarding athletes), distributed between the individual tournament prizes and the Grand Prix prices.

Bicapawn Xacobeo Chess Festival celebrates 2022 as the Year of The Woman in Chess, as endorsed by FIDE. We aspire to a future in which women compete at the same level as men in chess, and we want to break the barriers that slow this progress. We want to encourage women to participate in professional chess and to compete for prizes.

We also want to promote chess for kids, as chess has many benefits at a young age: analytical thinking, strategy, learning abilities and more.

For both of these reasons we have prepared special prizes. The total net prize fund of 70,000€ is distributed in 52,500€ for Tournament prizes and 17,500 for the Grand Prix, including the special prizes that we have designed for you

Registration cost for one tournament:

GM and IM and players with a rating >2400 are free of charge.

Entry fee and related payment have to be fully paid prior to Oct 15th 2022.


Participation is open to all FIDE rated players with FIDE ID.
Registration can be made online via the following form until 15th of October 2022.

Registration can be made online until 15th of october 2022

For delegations coming from countries requiring entry visas into Spain, these can be obtained from Spanish Embassies or Consulate Offices in your respective countries. We will avail an official invitation to delegations that need a copy for visa processing, and the organizers will notify the reason for the trip to the administrative bodies of the countries of residence to facilitate obtaining the visa.

1. Passengers coming from countries requiring entry visas into Spain, must present a DIGITAL COVID CERTIFICATE OR EU EQUIVALENT on vaccination against COVID-19 or a negative certificate of an active infection diagnostic test or a certificate of recovery after passing the disease.

2. Passengers mentioned in the previous point must fill in the SPTH Health Control Form manually entering the details of their vaccination, recovery or diagnostic test certificate. The system will send you a QR code that you will have to present both prior boarding, and upon your arrival in Spain. In the health control, you may be required to present this document certifying vaccination, diagnostic test or recovery.

3. Children under 12 years of age and passengers in international transit do not have to present a certificate or the SpTH QR.

4. All passengers will be subject upon arrival to a primary inspection consisting in temperature control, visual inspection and documentary control. Those suspected of suffering from COVID-19 will undergo a secondary inspection where a more exhaustive assessment will be carried out. If it is confirmed that the passenger suffers from a pathology with a risk to public health, if it is a close contact of COVID-19 or if a positive result is obtained after carrying out a PDIA for SARS-CoV-2 on arrival, the protocols established in coordination with the health authorities of the autonomous communities will be activated. For this, the health authority may request the collaboration of other administrative bodies, public officials or other institutions.

We use cookies on our website to give you the most relevant experience by remembering your preferences and repeat visits. By clicking “Accept All”, you consent to the use of ALL the cookies. However, you may visit "Cookie Settings" to provide a controlled consent.
Cookie SettingsAccept All
Manage consent

This website uses cookies to improve your experience while you navigate through the website. Out of these, the cookies that are categorized as necessary are stored on your browser as they are essential for the working of basic functionalities of the website. We also use third-party cookies that help us analyze and understand how you use this website. These cookies will be stored in your browser only with your consent. You also have the option to opt-out of these cookies. But opting out of some of these cookies may affect your browsing experience.
Necessary Always Enabled
Necessary cookies are absolutely essential for the website to function properly. These cookies ensure basic functionalities and security features of the website, anonymously.
Functional
Functional cookies help to perform certain functionalities like sharing the content of the website on social media platforms, collect feedbacks, and other third-party features.
Performance
Performance cookies are used to understand and analyze the key performance indexes of the website which helps in delivering a better user experience for the visitors.
Analytics
Analytical cookies are used to understand how visitors interact with the website. These cookies help provide information on metrics the number of visitors, bounce rate, traffic source, etc.
Advertisement
Advertisement cookies are used to provide visitors with relevant ads and marketing campaigns. These cookies track visitors across websites and collect information to provide customized ads.
Others
Other uncategorized cookies are those that are being analyzed and have not been classified into a category as yet.
SAVE & ACCEPT
English
Spanish English